Research and design of all workflows and interactions for SpotMe Backstage, a tool to administer large scale events.


SpotMe is a whitelabelled mobile app for large events that allows attendees to find all the information they need during the event and let's them actively take part and connect with each other.

Before Backstage was available the whole administration of the events would be done by the developers over a terminal console. This proved to be very cumbersome and error prone, with the developpers being kept from doing their actual job.
In the first part of the research I built a content object model for all the forms of content that were essential to the event, such as participants, locations, talks etc. These content models helped me and the team to pin down the tasks that users had to be able to perform in the new administration tool. It quickly became clear how immensely big the scope was.

The two major challenges were the amount of data and the way the data was fed into the system.
A typical event would for instance have thousands of participants and each participant would have between 80 and 120 data points. The challenge was not in displaying the data. Enabling the users to interact in with the data in a flexible way was the difficult part.
Further more, research showed that event organizers typically use Excel to manage the data. My approach had to make sure to take Excel into account and prevent problems that could arise from it, like content duplicates or overwriting changes made on the system. 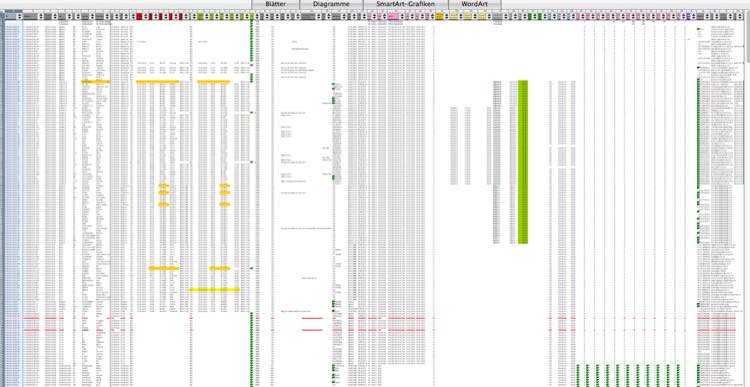 The function of the prototype was to test the information architecture for the different types of users and make sure that the complex workflows would be understood by users and developers alike.

The most promintent challenges were bulk editing data (making it possible to change any criteria for a set of chosen entries), importing data, managing translations for the event (e.g EU events have information in 19 languages)

This lead to a set of unique interaction patterns to efficiently import, change and monitor changes of large amounts of data.